On July 1st 2019 as reported on by Nick Sibilla of Institute for Justice, (a public interest law firm) that President Donald Trump signed a bill into law that prevents the IRS from raiding the bank accounts of small-business owners. The article reported that The Clyde-Hirsch-Sowers RESPECT Act, part of the Taxpayer First Act (H.R. 3151) that Congress passed is actually named after two Institute for Justice clients Jeff Hirsch and Randy Sowers, who they claim were subjected to aggressive cash seizure raids for so-called ‘structuring law’ offenses also known as smurfing in banking jargon.  Meaning Congress ruled to rein in civil forfeiture, which previously allowed the IRS to confiscate property without ever officially filing criminal charges. The Bank Secrecy Act law that passed 1970, requires financial institutions to report currency transactions in excess of $10,000 to the IRS. This law also makes it a crime to structure currency transactions to avoid the reports.  But if someone frequently deposits or withdraws their cash in amounts just below $10,000 to avoid reports, then previously IRS could seize it for under the “structuring” law with civil or criminal forfeiture proceedings. law.  As Nick Sibilla mentioned in a Forbes article on the subject, he went on to say “Even though their money was earned legitimately and despite the fact that they were never charged with a crime, in 2012, the IRS seized nearly $63,000 from Randy and more than $446,000 from Jeff. It took years of litigation and high-profile coverage before they won their money back.” 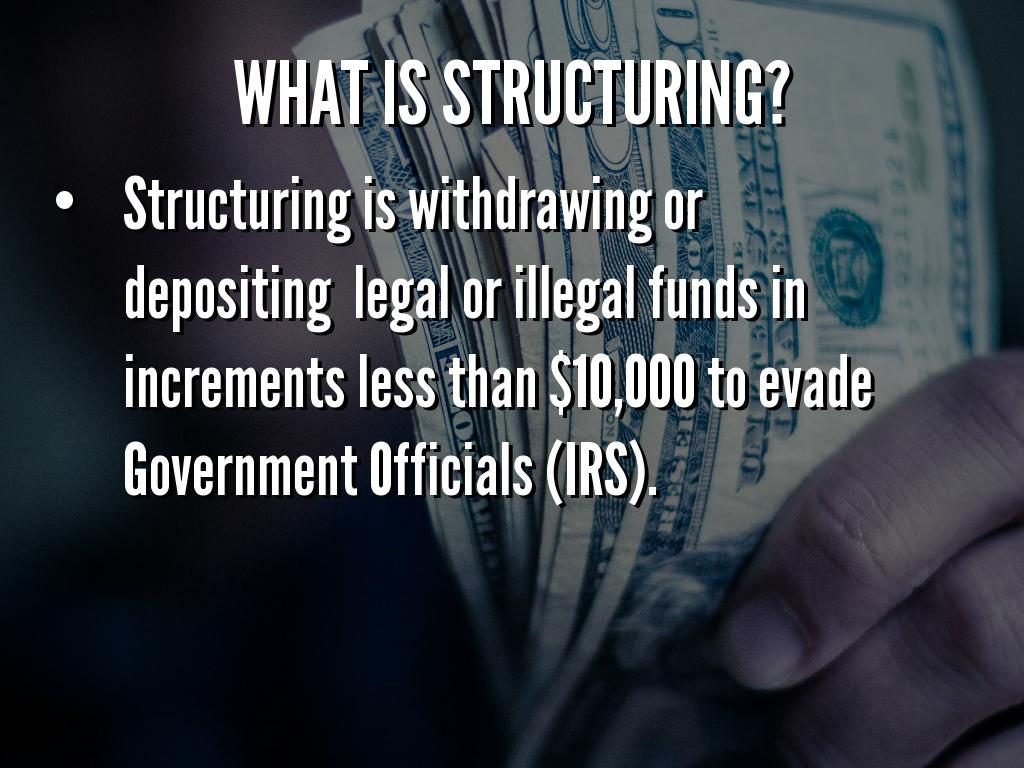 According to another Forbes columnist Robert Wood’s article titled “91% Of IRS Seizures For ‘Structuring’ Involve Lawful Taxpayers” the Treasury Inspector General for Tax Administration (TIGTA), published a report in 2017 that found the IRS Criminal Investigation division enforced structuring laws primarily against individuals and businesses whose income was legally earned.

They audited 278 structuring cases, in 91% of those IRS investigations, TIGTA “did not find evidence that the structured funds came from an illegal source or involved any other illegal activity.”

This structuring transactions civil forfeiture program (which is meant to catch criminal enterprises) can be devastating for cash-heavy small business owners such as jewelry stores, restaurants, gas stations, scrap metal dealers, and dairy farmers in this case.

As Nick points in his article, his firm’s client Jeff owns a Long Island convenience store distribution company and Randy is a Maryland based dairy farmer.  These are not only cases of non-criminal business owners being targeted by the IRS, according to a “Seize First, Question later” report from the Institute for Justice, from years 2005 to 2012, the IRS used civil forfeiture to seize almost $200 million from nearly 2,100 business owner cases. Here is the weird part if they were finding large criminal enterprises that there structuring transaction laws were supposed to catch, then why were 50% of cases involving amounts under $34,000 in cash. Hardly the next Pablo Escobar operation at these numbers.

Now with the passing of this RESPECT Act, the IRS can now only seize property for structuring if it’s “derived from an illegal source” or if the money were structured to conceal criminal activity. This Respect Act is a step towards changing some of the policies by the IRS. The Institute of Justice filed a lawsuit about this back in 2014, and then Richard Weber, Chief of I.R.S. Criminal Investigation division, announced in NYT that the IRS would stop pursuing “legal source” structuring forfeiture cases unless there are exceptional circumstances justifying the seizure and forfeiture and the case has been approved at the director of field operations.  Since that statement, the structured cases and assets amounts seized decreased from 31.8 million in 2014 down to $6.2 million in 2015.

A senior attorney for Institute of Justice Darpana Sheth said “With the Clyde-Hirsch-Sowers RESPECT Act now law, innocent entrepreneurs will no longer have to fear forfeiting their cash to the IRS, simply over how they handled their money.” He went to add that “seizing for structuring was one of the most abusive forms of civil forfeiture and we’re glad to see it go.”

Another benefit besides banning IRS from targeting legal source fund structuring, it that this new RESPECT Act will speed up the process for judges to review these structuring seizures more quickly. This new law will help to more adequately protect “due-process’ for small business founders. Prior to this new law, it could months or even years before a business owner could challenge a seizure in a court.

In the specific case pointed by Nick Sibilla, against Jeff Hirsch, their case dragged almost 3 years, but it was never even heard in court because the IRS never formally filed a complaint to forfeit their cash, it only his law firm Institute for Justice filed a lawsuit on their behalf did they get their funds returned from the government.

For entrepreneurs and small businesses that have been subjected to bank account seizure, and getting cut off from funds, it makes it easier for the government to win by attrition. Meaning federal government prosecutors are backed by the nearly limitless resources, while small businesses have less to hire a legal counsel to fight this.

The passing of the RESPECT Act should subdue this seize and squeeze tactic. Under the law, owners can request a hearing in federal court, which must be held within 30 days of their request. If a judge rules that the IRS lacked probable cause for the structuring seizure, the agency must return the money it confiscated. The last time legislation passed to address reforming forfeiture was back in 2000, with the  Civil Asset Forfeiture Reform Act (CAFRA) which was not that big of a change in federal forfeiture laws. But this newly enacted law as part of the Taxpayer First Act, could be a positive step towards safeguarding American small business owners from abusive forfeiture efforts.