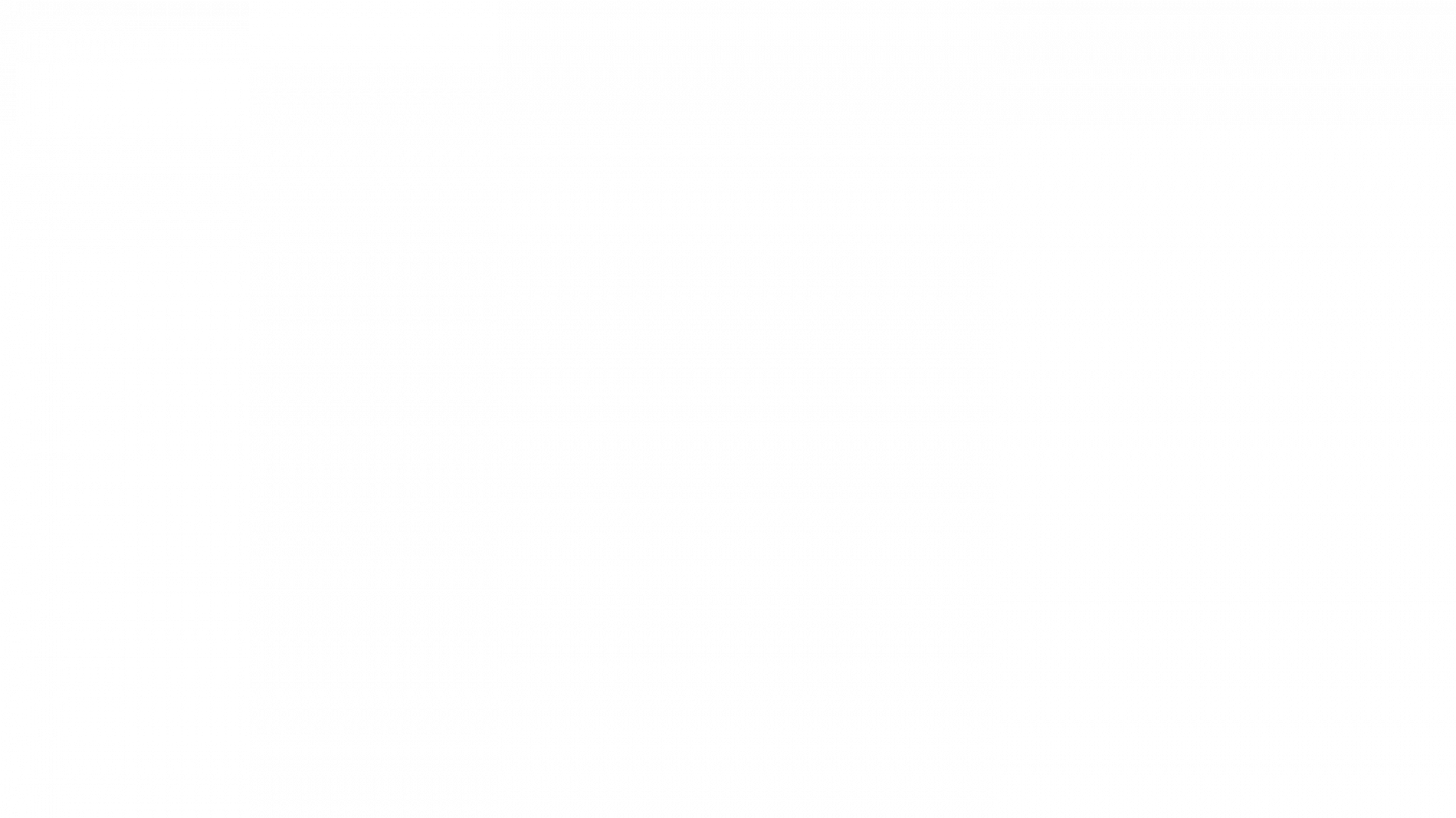 Since last December when Trump signed the TCJA reform into law, economists are still waiting for the GOP’s promise that cutting corporate taxes would boost business spending and investment.

Just to recap, the Corporate tax rate was lowered from 35% down to 21%, offered an additional tax break on repatriated overseas profits of U.S. companies. as well as slashing some individual brackets. If we flash forward to now, the tax cut is not as popular as Trump would have hoped to go into the midterm elections, according to a few recent polls, more people disagree than agree with it. Recently the research conducted by Yahoo Finance, found that many Americans and even business owners felt that tax cuts were geared to benefit the wealthy and corporations much more than the middle class.  The Republicans could be affected in the midterm elections with the way people vote this time.

Trump, Paul Ryan, and other GOP senators pitched and argued that slashing the corporate tax rates would stimulate an immediate spike in corporate investment that would benefit employees. The theory was if businesses got a tax break they could use the savings to invest in more innovative technologies, more equipment, open new buildings, hire more workers and give pay raises etc. Capital expenditures (money companies invest in fixed tangible assets) is supposed to be a major piece of productivity growth and economic expansion.

Consequently, as of now, there isn’t enough data to support that such a corporate stimulus has taken place from the tax cut. On November 1st, Paul Ashworth, an economist at Capital Economics, wrote: “There are still few signs that the recent tax cuts have boosted the economy’s supply side, and with business investment softening, the chances of an eventual pick-up appear to be fading.”

Let’s take a look at some of the numbers

Morgan Stanley tracks a capital-expenditure index (Capex), that follows the changes in business spending, and it actually fell 0.6 points last month in October.

The index went up drastically back in 2017 and then peaked out in March 2018. Although it is still nearly at a record high, (see chart below) it has been going down for last 6 out the 7 months, which seems weird considering if there had been a surge in business investment resulting from the tax cut. 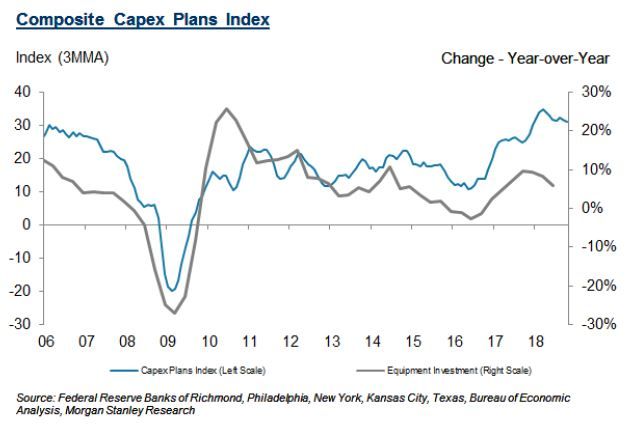 Business economists have determined that the tax cuts have not had a significant impact on changing corporate investing or hiring plans. The National Association of Business Economists conducted a survey recently that had a question as to whether the company changed any hiring or investment plans based on the Trump tax cuts. And an astounding 81% of business economists said there was no change.  6% went on to say their companies had increased hiring. 1% said they had delayed making investments, and the remaining 12% said investment had gone up, because of the tax cuts,

Now according to reporting from Yahoo Finance, business spending had increased from the data in the third-quarter GDP report that came out on October 26th.  Nonresidential fixed investment, which tracks and measures business spending, rose only 0.8% from the second quarter to the third, which happens to be the weakest number since the fourth quarter of 2016. Basically, the overall view or pattern looks like the economy may be slowing down.  Nonresidential fixed investment went up by 11.5% in the first quarter, which was followed by 8.7% in the second, and now only 0.8% in the third.

Now economists admit that it could take years for the tax cuts to fully work their way into the cycles of the economy and really be able to spark the growth that they are shooting for. And of course Trump’s Council of Economic Advisors tweeted a chart showing capital goods orders and other measures of business spending have risen during the first 2 years of Trump’s presidency. If we take a closer look at these charts there is a similar trend line for both 2018 and 2017, that does not have any surge or spike – as well as the slow tapering decline of activity in the last few months. 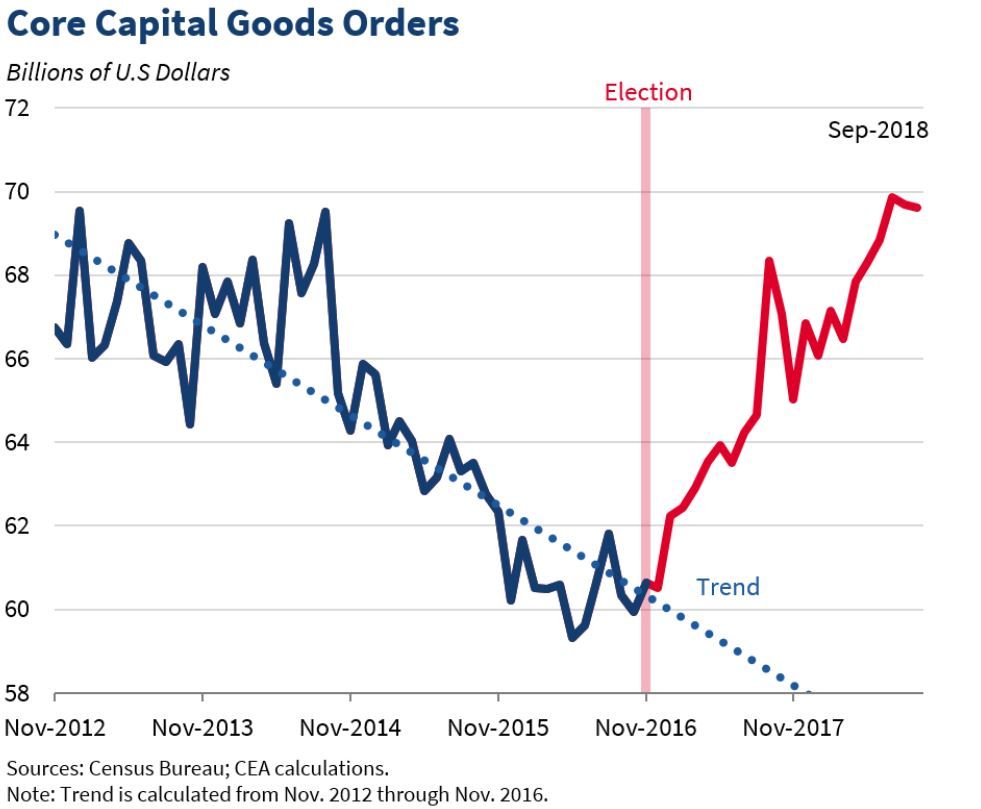 There could be 2 other factors that might be contributing negatively against the stimulus results from the tax cut. One is that interest rates  (inflationary pressures has caused this ) having been steadily going up, which some economists think they should be, during the later part of ecomomic expansion cycle – though it does make borrowing for investments more costly.  Some business leaders are concerned with the Trump administration’s trade policies, Tariffs with China, which over the short term are raising costs (on imported steel, export tariffs on soybeans, pork, sugar, orange juice, cherries) and could have adverse impacts such as holding off investment for fear of a trade war. Others think that we are in the late innings of an aging business cycle expansion.  So companies will be more hesitant to invest if they think a recession is coming or policy missteps might stunt economic growth.

November 6th voting is tomorrow and the economy is doing pretty well, but the GOP cannot take full credit in saying it was their corporate tax cuts that have spearheaded a business spending and hiring boom. Maybe the election of 2020 we will have the economic data to see the full effects of it.