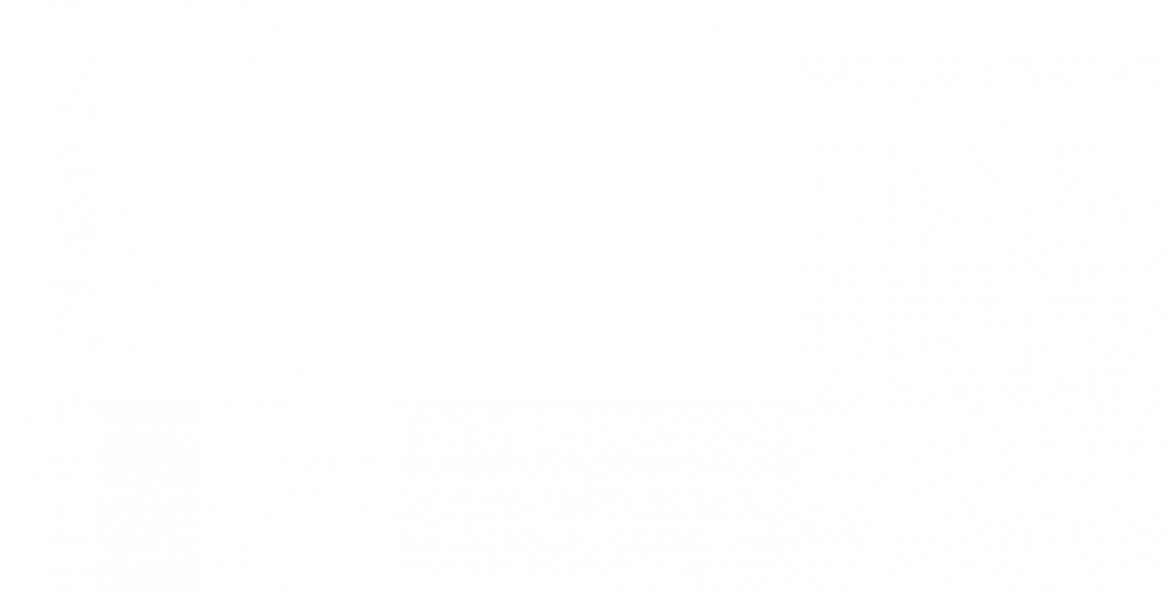 When Disruptive innovation comes to your industry, how to avoid the mistakes of Nokia, Blackberry, Blockbuster and Kodak

Elon Musk has a reputation for bringing disruptive innovation and change to established industries. Whether it’s electric cars, a cave rescue, tunnel transportation or space travel, the billionaire business mogul has no problem doing things his own way.

As Paul Bylund, the Assistant Professor of Entrepreneurship, at Oklahoma State University, wrote in an article for Entrepreneur Mag, stating that “entrepreneurs will find ways to disrupt every industry — it’s simply a matter of time. The lingering question is whether organizations will embrace the evolutions or fight tooth and nail to avoid change. Disruption might be an inevitability, but industries that stubbornly stick to the old way of doing things are only making the process more painful.”

Recently a Professor M.S. Rao, Ph.D, also wrote about dealing with disruptive change as a CEO leader in Entrepreneur Mag, mentioning that “once iconic companies, including Nokia, Kodak, Blockbuster and Xerox, disappeared from the market because they failed to survive in the age of disruption.”   During the 80s they were considered successful global operation companies, but technological disruption ended up wiping them out. No industry is completely safe, (although ones like healthcare are complex and harder to change because of strict red tape regulations) all sectors of an economy are subject to creative destruction. New and better innovations naturally replace old and comparatively inefficient processes. One major mistake that some of those company’s C-Suite made was taking any organizational achievements for granted or getting too complacent. Instead, they should prepare themselves to capitalize on disruption effectively.

Disruption is not a new kind of business problem

And in Professor Rao’s article he states “in the current global business environment, all sectors are disrupted — industries, organizations and individuals. Nothing is immune from it.”  As with some of his examples,  the invention of digital cameras disrupted old school analog cameras, quartz watches did the same to mechanical watches, and the Apple’s iPhone displaced RIM’s Blackberry phone. The mail-order DVD rental turned Streaming giant Netflix put the kibosh on the brick and mortar movie rental business Blockbuster. Netflix further developed their streaming technology and presenting content in a different way created a revolution in the way that media is consumed, which we are still seeing today.  We can see these market upheavals from the use of desktops to laptops to smartphones.

If we look back and study the innovation cycles starting with the First Industrial Revolution, which disrupted traditional methods of living and wage-earning via steam power and mechanized production. The second wave disrupted the first by changing lifestyles through electric power and international mass production. The third disrupted the second by automating such production. The fourth such revolution, the digital, is throwing at once fresh challenges and opportunities to humankind and is evolving at an exponential rather than linear pace.  After the internet emerged by the early 1990s, barriers to information were upended. New media changed the political discourse, news cycles, and communication in the fifth wave.  According to the Visual Capitalist infographic, the sixth wave, marked by artificial intelligence and digitization across information of things (IoT), robotics, and drones, will likely paint an entirely new picture. Namely, the automation of systems, predictive analytics, and data processing could make an impact. In turn, physical goods and services will likely be digitized. The time to complete tasks could shift from hours to even seconds. 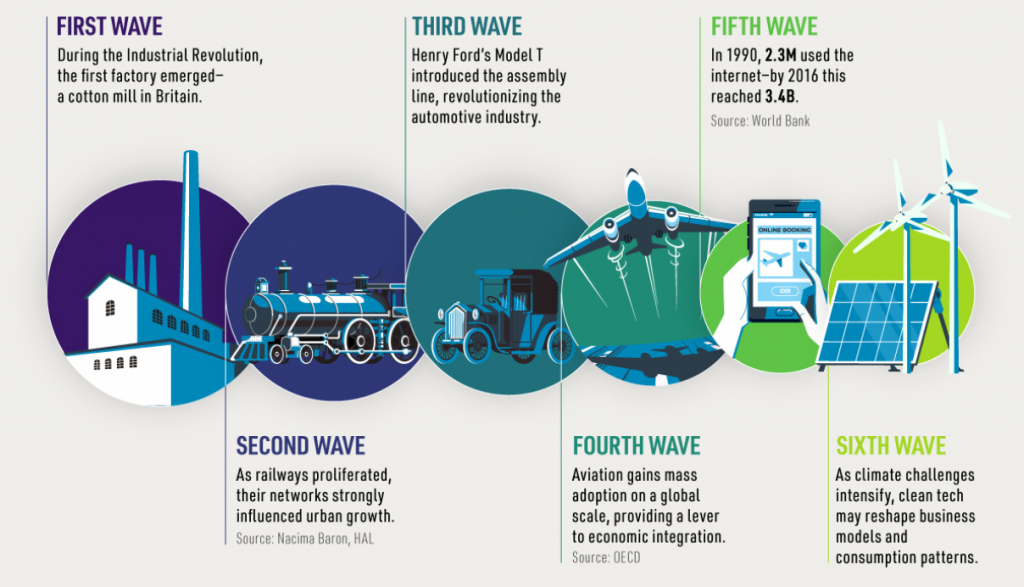 Humans have evolved drastically from the Stone Age to the Space Age, basically because of disruptive adaptations, breakthrough innovations, and must continue to embrace change to survive both physically and economically. Similarly, organizations must embrace rapid shifts in circumstances, and innovate constantly by predicting and preparing. Basically, to stay alive, to stay relevant, top companies have to continue to invest in groundbreaking, disruptive technologies – the same investments that got them to the top in the first place – even if that means working against those early wins.

Some of the well-known industry verticals most recently challenged over the last year due to the pandemic shutdown have been education, streaming, computer, banking, publishing, and print media, as well as insurance, real estate, construction, and healthcare. And some of the best-performing companies, along with their workforce, could disappear soon if they don’t innovate; a 2017 report by McKinsey Global Institute estimates that between 400 million and 800 million of today’s jobs will be automated by 2030, for example. 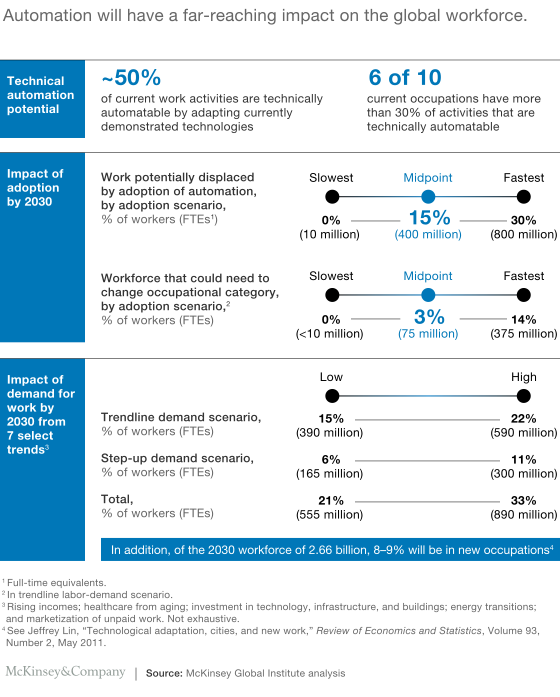 What is the role of CEO leaders in the age of disruption?

In this post-pandemic digital age we are living in, even seemingly small or minor technological innovations can upend a major industry or organization. With the emergence of AI solutions and the fourth Industrial Revolution, it has also become uniquely difficult to predict future disruptions. Therefore, CEOs must prepare mentally for changes in industries and organizations.  I have written previously about how an organization’s risk management functions can help increase the odds of success.

The professor stated, “they must prepare to overcome volatility, uncertainty, complexity, and ambiguity (VUCA).” Organizations must constantly be digitally transforming, evolving, and pivoting some of their core business models and effectively communicate these new ways of doing business to all stakeholders. They must build their competencies and capabilities. They must become champions of constant iterations, improvements, and ultimately change.

The problem is that CEOs usually focus on short-term goals such as improving bottom lines rather than the long-term goals of predicting and preparing. They must emphasize both to ensure survival and success. There must be a long-term strategy to embrace change: choose the right technology; emphasize organizational culture; collaborate across different functions; close the gap between strategy and execution, and foster agility to execute organizational goals and objectives.

Disruptions are created by new entrants and game-changing technologies alike, and the rate of change is enormous. At times, there is a scarcity of talent to rise to the occasion. Therefore, CEOs must acquire talent and act quickly to adapt and adopt new technologies and business models. They must find a balance by focusing on the long-term benefits of growth and innovation as well as focusing on short-term benefits resulting from disruption.  Sounds a little weird but it’s true.

The role of executives in handling and leading change strategically

Business owners and executive leaders have massive organizational challenges. One of them is embracing change effectively. This is easier said than done because there are several tasks involved in the process. One is improving processes and procedures and rebranding without compromising the core brand. Although every CEO understands that change is inevitable, some are more uncomfortable with it. They appreciate the status quo and emphasize continuous improvement. That doesn’t help in the long run. They might also make the mistake of focusing on too many things at a time. Instead, the goal is to be selective, and uncompromising. Additional reasons CEOs might fail to embrace change include:

There is no “one-size-fits-all” for change management; instead, emphasis needs to be on a flexible template regarding it, and the ability to customize according to each. Modern corporations including Microsoft, Apple, Google, Facebook and YouTube modified business models with changing times and technologies, along with Amazon, Walt Disney, Netflix and Spotify.

Change involves uncertainty, communication challenges and chaos that employees usually don’t appreciate. Therefore, CEOs must communicate with their stakeholders the perils involved in not changing, even as they explain advantages involved in embracing it and showing benefits. They must also involve the stakeholders in the change process —  must be transparent and must build trust — and remove institutional roadblocks, if any. Another key need is accepting feedback to improve decision-making, and motivating employees during an evolutionary process. They must be patient and persistent, because real change that is sustainable takes time.

Be agile and treat disruptive change as an opportunity, not as a death threat

The International Data Corporation  (IDC) reports that 60% of global GDP will come from digital organizations by 2022. This startling statistic is also an opportunity in disguise if viewed optimistically and capitalized effectively. Digital platforms can lower prices through new cost structures and offer new experiences to consumers. Therefore, instead of treating technological revolutions as threats, CEOs must treat them as opportunities and build strategies to capitalize on them. Companies from Apple and IBM to Nestle and Hyundai have capitalized on such disruption and thrived. New tech also allows upcoming and/or small-scale companies to take on mighty organizations; several, such as Alibaba, Airbnb and Uber have challenged traditional giants and are thriving.

Disruption solutions lie in thinking out-of-the-box and innovating as per changing times and technologies. And merely sporting knowledge is not always a solution; a more profitable path includes acting swiftly and converting threats into opportunities. There are many factors that stop big corporations from innovating. It is a huge risk with often unknown results. However, it is the only way to ensure that companies remain relevant and grow, otherwise they might face the same that other big companies did, they were replaced by more innovative competitors.

One way PepsiCo, Inc, the multinational food, snack, and beverage corporation does to encourage innovation and supporting startups while improving their products and delivery systems for their customers is by running startup competitions or challenges around ideas such as “investing in functional nutrition food and beverage products” or “finding new ways of delivering food and beverage products.” By participating and funding these types of incubator contests, it can help them find startups that have developed a new innovative way to deliver nutrition or have novel ingredients to implement in new and/or existing products of PepsiCo that in turn can fuel innovation for them by investing or acquiring the company. Other ways many large corporations find growth or innovation is by M&A such Facebook buying Instagram, Amazon buying Wholefoods, Google Cloud, buying Looker, or Salesforce acquiring Slack etc.  Contact us for a free consultation to discuss pain points, financial and innovation risks and a plan for growth.