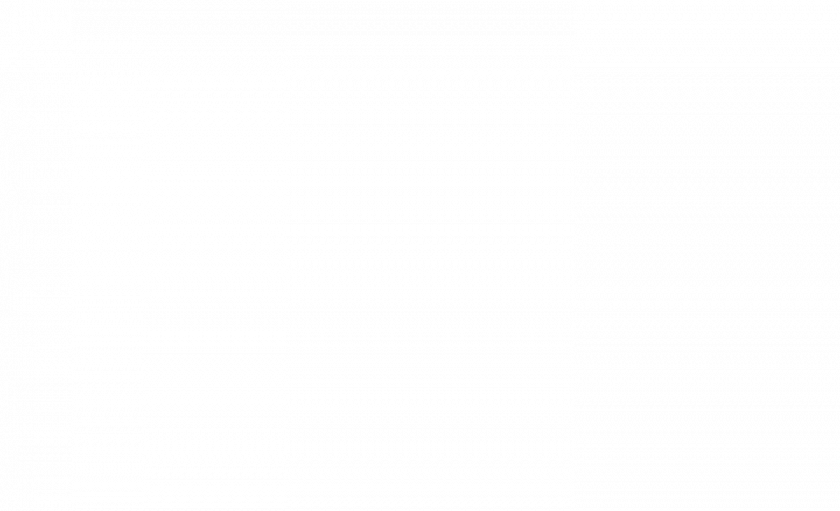 Business owners and investors are paying more, but CBO officials can’t fully explain why tax revenues are hitting high as a share of the economy. The Wall Street Journal recently reported that an unprecedented amount of income tax revenue is flowing into the federal government, which is driven in part by investors and business owners, but the size and speed of the increase have surprised even the nation’s fiscal-policy experts.

According to the Congressional Budget Office, individual income tax collections are poised to reach $2.6 trillion, or 10.6% of the economy in the fiscal year that ends Sept. 30. That is up from 9.1% in 2021 and would mark a record in the 109-year history of the tax, topping the war-tax receipts of 1944 and the dot-com boom of 2000.

The surge has been particularly notable in taxes outside paycheck withholding, a signal that capital gains and business income are driving the trend. The Penn Wharton Budget Model estimates collections of non-withheld taxes reached an inflation-adjusted $522 billion in April 2022, compared with just over $300 billion in 2018 and 2019, before the pandemic. About one-third of this year’s jump in individual income tax receipts results from growth in the economy and in the types of income that make up GDP, especially wages and salaries. Both nominal GDP (output not adjusted to remove the effects of inflation) and wages are expected to rise by 10 percent in 2022. 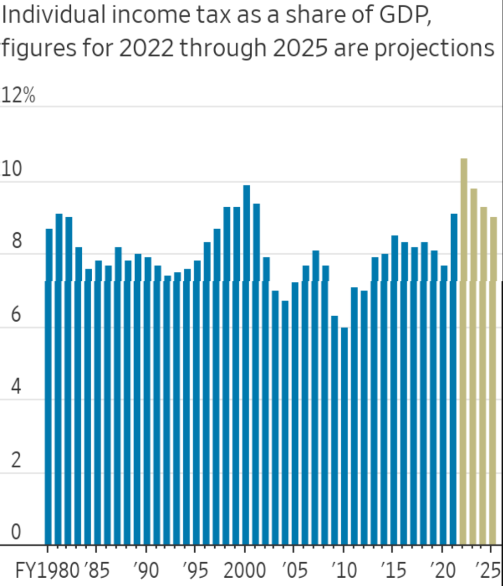 In CBO’s estimation, another one-third of the growth in receipts in 2022 results from the end of temporary provisions enacted in response to the pandemic. One of those provisions allowed employers to defer payment of a portion of certain payroll taxes in 2020 and 2021. The payment of half of those deferred taxes, combined with the end of other temporary provisions, has boosted receipts in 2022.

While that is part of the explanation, CBO officials and other economists who monitor tax collections say tax revenue became disconnected from other economic data in ways they still don’t fully understand.

CBO officials identified several factors for further study. Perhaps, they said, a greater-than-usual share of capital gains were short-term gains taxed at rates up to 40.8% instead of 23.8%. Perhaps income grew faster than expected for those in the highest tax brackets compared with others, which means more income than forecast would be taxed at higher rates. The administration is waiting for more granular data to come in as it analyzes what is happening, said Lily Batchelder, assistant Treasury secretary for tax policy.

It is individual income taxes—more so than corporate or payroll taxes—that are most notably above forecasts. Individual income taxes include those levied on wages, capital gains from investments, and business profits reported on owners’ personal tax returns. Typically, income tax collections echo the broader economy, so money coming into the government alongside tax returns reflects what happened during 2021.

Last year was unusual, with historically high inflation, a booming stock market fueling a booming housing market and trillions in government aid sloshing through the economy. And that may have yielded weird one-time changes in tax collections as people sold investments and used government aid. Inflation may have pushed up nominal income before tax-bracket indexing is able to catch up.

“Maybe this is another data point that suggests that when accommodative monetary policy and fiscal stimulus are really, really aggressive, it has a larger effect than we originally thought,” said Kyle Pomerleau, a senior fellow at the conservative-leaning American Enterprise Institute.

There are other possible explanations, one from a law that Congress passed and one from a law it didn’t. The $1.9 trillion American Rescue Plan, enacted in March 2021, pumped money into the economy. Much of that wasn’t taxed directly, including $1,400 per-person stimulus payments, aid to state governments and expanded child tax credits.

But as consumers spent that money on goods and services while states spent that money on workers and the pandemic response, the law created taxable income that otherwise wouldn’t have existed, and that showed up on 2021 tax returns. That came atop pandemic-era legislation in 2020 that aided households and businesses.

“We may have just taxed the borrowing the federal government did,” said former CBO director Douglas Holtz-Eakin, now president of the conservative American Action Forum.

The March 2021 law—blamed by some economists for exacerbating inflation—might be yielding revenue, but that doesn’t make it a good policy choice, he said.

What Congress didn’t do may have mattered, too. Some high-income people might have accelerated income into 2021 because they feared that Congress was likely to raise taxes soon.

President Biden and Democrats proposed significant tax increases on high-income households throughout 2021, all of which would have raised top tax rates on capital gains and ordinary income.

That bill is stalled, but its prospects last fall might have caused some investors to move. Shifting income ahead of a tax-rate change would repeat a familiar pattern seen during prior tax increases. Often, that happens through sales of stock that otherwise would have gone unsold. Business owners can sometimes adjust the timing of income and deductions to concentrate income in years with lower tax rates.

John Ricco, associate director of policy analysis at the Penn-Wharton Budget Model, said if capital gains are responsible for a large portion of the projected jump in individual tax receipts in 2022, that could serve as a drag on future federal revenue.

“This year probably represents a shift forward of revenues that might have happened in future years,” he said. “So this probably doesn’t portend some long-run, rosier fiscal picture.”

The CBO forecast projects individual income tax revenue to drop to 9.8% of gross domestic product in fiscal 2023 and 9.3% in 2024. The long-run picture is murkier because large pieces of the 2017 tax cuts are set to expire after 2025 but Congress may extend some or all of them.

Beyond taxpayer behavior, the economy may be experiencing faster growth than estimates of GDP, said Neil Mehrotra, deputy assistant secretary for macroeconomics at the Treasury Department.

GDP—which analyzes expenditures by households, governments and businesses on goods and services—showed the economy shrank by an inflation-adjusted 1.5% annual rate in the first quarter. But gross domestic income, another way to measure economic activity that analyzes factors such as wages and profits, showed 2.1% growth. The Commerce Department produces both figures.

The income measure has outpaced the spending measure since the brief recession ended in the spring of 2020.

“To the extent that the economy is even stronger than we thought, then perhaps the size of the tax revenues that are coming in is less anomalous,” Mr. Mehrotra said. 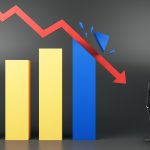 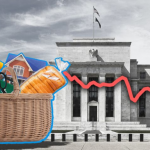