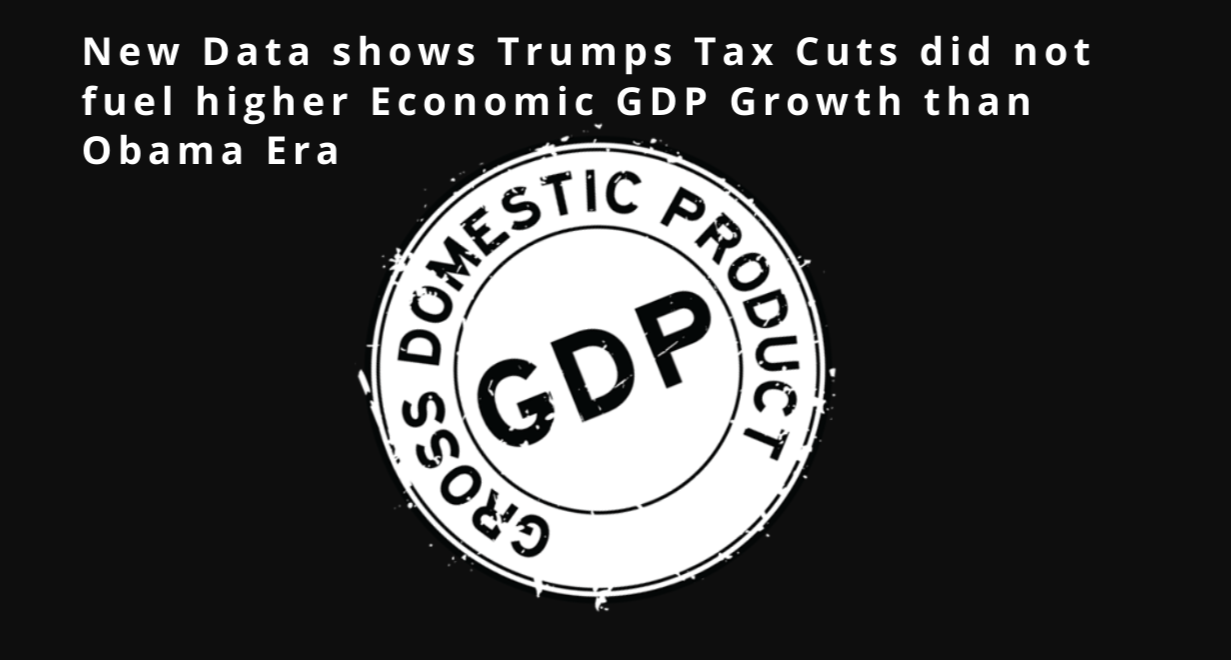 On January 30th, 2020 The U.S. Bureau of Economic Analysis released its first estimate for the December quarter of gross domestic product and it shows the economy has slowed down growth at a rate of only 2.1%. Read the ‘BEA Technical Note 4th quarter GDP report” for further info.  The US GDP metric —is the broadest measure of the dollar value of the nation’s economy. Chuck Jones a Forbes Contributor recently wrote about this news in an article titled “Trumps economic growth is slower Obama’s last three years” and stated that “for 2019 GDP growth was 2.3%,(on a year-over-year basis), which is down from 2.9% in 2018 and just below 2.4% in 2017, Trump’s first year in office.”  Jared Bernstein, a senior fellow at the Center on Budget and Policy Priorities wrote in a recent Op-ed for Business Insider noted: “that’s a decent growth rate, to be sure, and 2019 marks the 11th year of a historically long expansion.”

If you look back and review the last 12 economic quarters that Trump has been the President of only 4 of them had GDP growth hit the 3% and 6 of the quarters have seen stagnating growth of 2.3% or less.  For the last 3 quarters of GDP growth has been 2.0%, 2.1% and 2.1%, respectively. This is a far cry away from the Trump administration’s bullish forecast which was based on the belief that the tax cut developed and passed by Trump and Congress at the end of 2017 and deregulation would increase the economy’s trend growth rate to 4%, 5% or even maybe 6%.  As Mr Bernstein points out that a keyword in there is “trend”, meaning a long-term shift in trajectory as opposed to the pattern you see in the chart above.

The Trump administration have long argued that lowering the Corporate tax rate from 35% to 21% would spur economic activity delivering a lasting growth above the roughly 2% that has prevailed over the last 2 decades. The theory was that lower corporate rates would incentivize more capital investment in things such as new manufacturing factories, large equipment purchases and this added capital stock would permanently boost the economy’s productive capacity.

Mr. Jones stated that “under Trump business investment has turned negative the past three quarters and is negative or essentially flat when the impact of inventory changes are taken into account.” he furthered it with “pretty much the only segment of business investment that has been positive the past three quarters is Intellectual Property Products.”

Another segment that was down was consumer spending in the 4th quarter of December. It went from a growth rate of 4.6% last June quarter to 3.2% in September to only 1.8% over the last months.

In the Forbes article Mr. Jones also points out that there are 2 major segments (inventories and trade) that vary widely in any given quarter, that can either add or subtract significantly from the GDP calculation. Then there is a 3rd component which is the government’s contribution, and it “doesn’t tend to have the same multiplier effect on the economy as consumer or business spending as military goods don’t increase productivity.”

Another economic data metric to look at is the contribution from Personal Consumption Expenditures (or consumer spending) plus Gross Private Domestic Investment (or business investment) minus the Change in Private Inventories (which can move back and forth quarter to quarter), which Mr. Jones thinks shows a better view of the underlying economy. His analysis states that “by making these changes it increases the growth rate in the June quarter, slightly hurt it for the September quarter and substantially decreased it for the December quarter.” which is further shown here:

The trend of 2.8% growth in the June quarter to 1.2% in the December quarter is not positive.

Sometimes a more useful metric than the GDP growth rate that gets reported each individual quarter is the change year over year.  The reasoning behind this is that quarterly results take the quarter-to-quarter change and multiples it by four.  Meaning that any component of that has a stronger or weaker result in a particular quarter can create an annual number that is not an accurate indicator of the real economy.

If we look back to when Obama took office he had inherited an economy that was teetering on the brink of a recession turning into a depression.  Mr. Jones points out that “n 2009 personal consumption dropped 2.5% year over year and business investment fell off a cliff, down 21.2%. Both segments recovered and started the current 10-year plus economic expansion.” 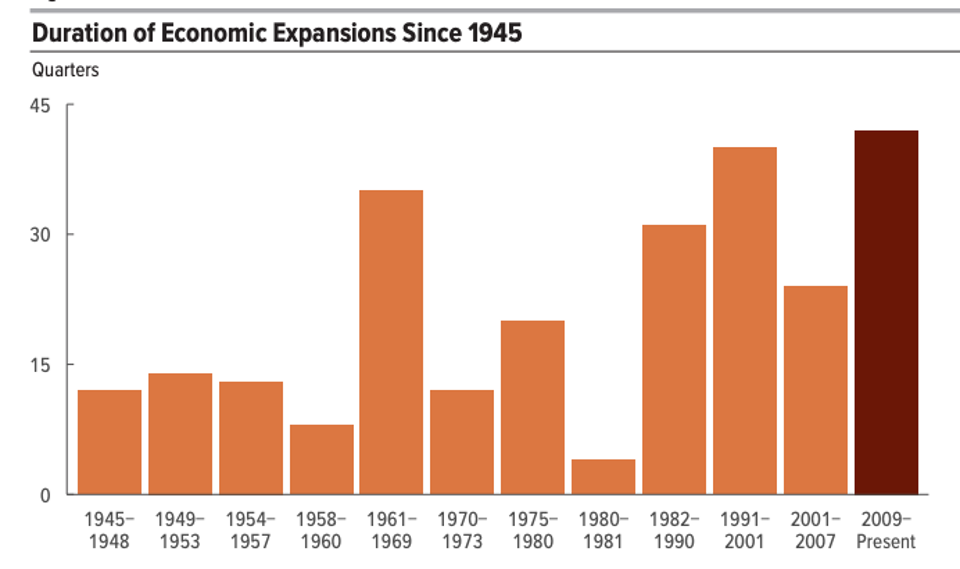 Mr. Jones also points out that using the GDP metric of consumer spending plus business investment adjusted for inventory changes, of which Obama’s last 3 years in office had growth rates of at least 2.17% and as 3.06%.

In 2019 the adjusted growth rate was only 1.99%. This is less than Obama’s three last years in office and less than five of his last six years. 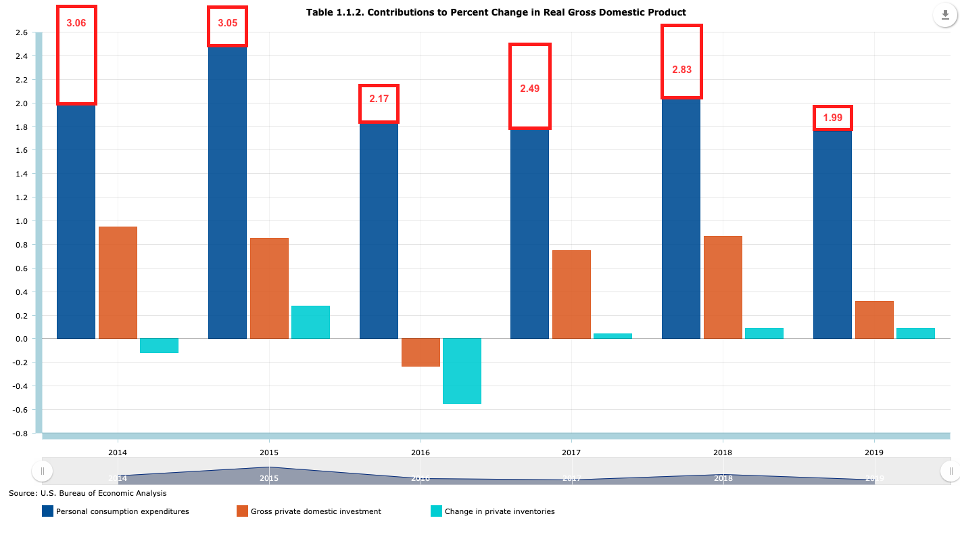 You may recognize this as the supply-side-tax-cut scenario popularized by economists Art Laffer (Laffer Curve) and Rober Mundell, wherein tax cuts targeted at investors “trickle-down” through the broader economy, lifting growth, wages, and spinning off more tax revenue to help offset the tax cut’s initial cost. Unfortunately, the supply-side chain theory is not working according to the new BEA GDP data report,  which in fact has shown that real business investment has been declining for the last three quarters in a row, the worst such stretch since the last recession.

Keynes can tell you why there’s no boost 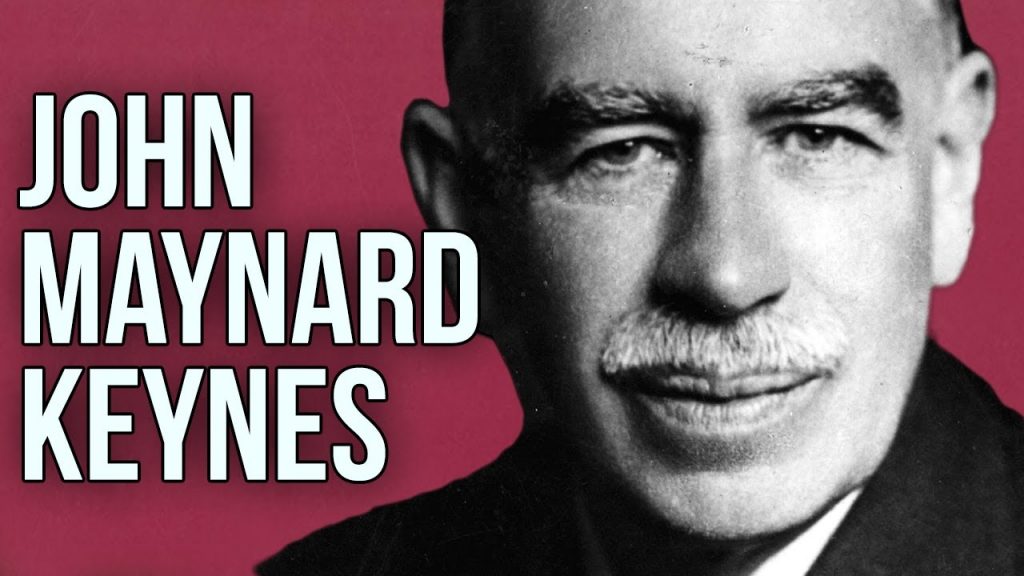 So if we examine why did GDP growth go up for a little while in 2018, which happened to coincide with the Tax reform law was passed and went into effect.  It is not a coincidence.

The corporate tax cuts did stimulate growth temporarily, but that was not permanent. As Jared Bernstein stated, “it’s effects, in other words, were the type associated with John Maynard Keynes, not Laffer.” Mr. Bernstein explains that in the context of Keynesian economics, it is based on the theory that – “in periods when private sector demand is inadequate to achieve full employment, the government should step in and temporarily make up for the lost demand through deficit spending.”

Though some economists figured that Keynes was merely talking about recessions, that is not the full context.  His biggest insight was that it is not unusual for market economies to underperform, and when they do so, there’s a mechanism — public spending — to get back to full capacity.

Another key difference between Keynes and the Laffer economic theories, Mr. Bernstein says “is that the Keynesian interventions tend to affect the ups and downs of the economic cycle, as opposed to the underlying, trend growth rate. Keynesian fiscal jolts give economies a temporary boost by using, for a limited time, public-sector demand to offset lagging private-sector demand.”

Not this is not how Paul Ryan, Kevin Mcarthy, and Trump had sold the tax reform when it was pitched and made into law, even though that what the tax cut did in 2018. As Brookings Institute analysts show, government spending added just under a point to GDP growth in 2018. By the end of last year, that impulse had faded and when it did, as the figure above shows, the growth rate downshifted from around 3% to around 2%.

Mr. Bernstein postulates, “simply put, the tax cut was all Keynes, no Laffer. It perked up the 2018 growth rate but it did nothing, as the above-cited investment numbers imply, to lift the economy’s underlying productive capacity.” 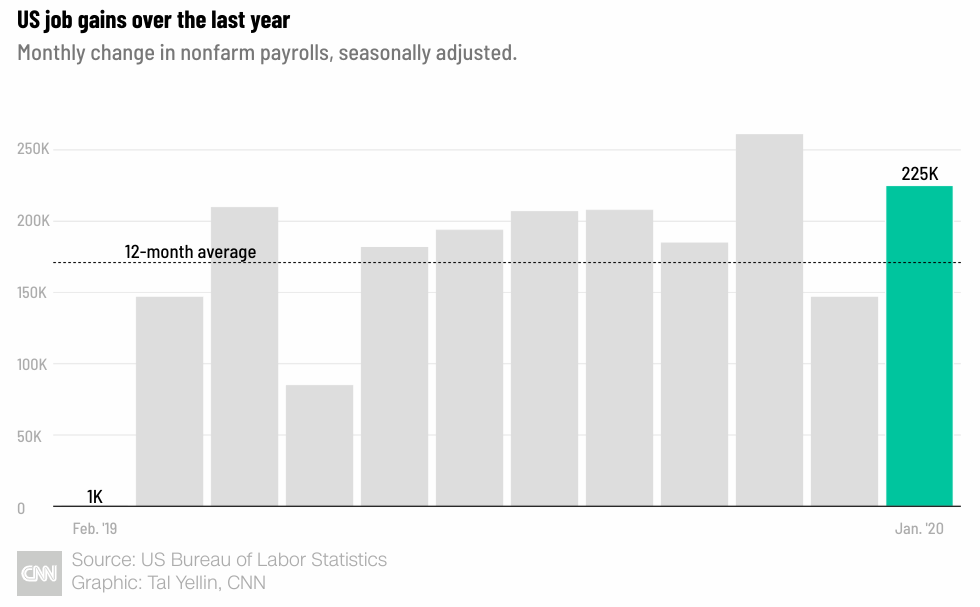 So let’s not act like nothing was accomplished. The economy is relatively strong, on February 07, 2019, it was reported that the “U.S. Economy Added 225,000 Jobs in January” but when Trump makes a claim at the State of The Union that “Our economy is the best it has ever been”, that is not entirely true according to fact-checking by the NYT.

The real state of our union:

— The typical American household is poorer than before the financial crisis began in 2007.

And while focusing on corporate tax breaks helps the wealthy more than the middle-class workers, it obviously played a role taking the unemployment rate down to a 50-year low of 3.5%.  But unless we relentlessly go back to the Keynesian fiscal well year-after-year, we should expect such benefits to fade, as they have. According to a recent article in the Hill titled “slowing economy complicates campaign messaging for Trump” contributor Sylvan Lane states “now Trump and GOP lawmakers counter that, even with slower growth, the U.S. is outpacing Asian and European allies who are teetering on the brink of recession. Mark Zandi, chief economist at Moody’s Analytics. says “the economy stuck exactly to the script that economists thought it would, his policies have not added anything to the economy’s performance net-net.”

Now conservatives maintain that the economy is strong, and they argue that some of the economic benefits of the GOP tax law have been undercut by Trump’s trade war. Republicans are hopeful that “phase one” of Trump’s trade deal with China and his trade agreement with Mexico and Canada will lead to more economic gains for the U.S.

Given that there has been a sort of a subdued interest from the corporate sector to reinvest their elevated after-tax earnings if the U.S. wants to make a play for sparking structural economic growth —lifting the underlying trend growth rate—it should consider a large public investment program. Making investments in productivity enhanced public goods, which includes overhauling and modernizing our physical infrastructure, human capital and tackling the effects of climate change.

Now there are no guarantees (only in death & taxes) that it will boost the growth trend, but it has a better chance of doing so than just passing regressive tax cuts. I am not saying that entrepreneurs and business owners don’t want to minimize their tax liabilities as much as possible because that is smart and I help companies to achieve this but does lowering corporate tax cuts fuel higher long term economic GDP growth? So far it remains to be seen.