Is the Fed Lending a Blind Eye to a $4 Trillion Issue?

Wall Street is in an uproar as it contends that it is watching the Federal Reserve make one of the largest policy mistakes in the history of the United States.  Yes, exponentially rising interest rates are a problem. Yes, reserves risk being depleted as the Fed seemingly internally combusts. And, yes, high demand for short-term cash is at an all-time high.  Those issues are not the primary worry on Wall Street, however. The more scary concern is that of fixed income analysts’ worry revolving around the Fed’s crisis-era bond investment practices.

A thorough investigation of the central bank in the United States reveals that, since October 2017, the Fed has been reducing its Treasury holdings and possession of mortgage-backed securities- this has all been happening at a steady rate.  In conjunction with this sell-off has been a backlash in the overnight lending arenas which indicate that short-term cash demand is at an unprecedented level. Fed officials refuse to take any responsibility for these ominous trends and blame market technicalities; Wall Street, though, is not believing that story.

This could all lead to what is being deemed a $4 trillion mess.  The most vocal anti-Fed advocates are expecting a catastrophe and site that, if the unwinding does not come to a halt, our entire banking system could be drained beyond repair.  In turn, this would lead to a surge in market volatility and a general dismay with the Fed and its ability to make sound decisions for rates based on sound judgement. In other words, can we trust our Federal Reserve?  If the critics are right, such distrust would inevitably raise borrowing costs in an already lagging economy. Reserves will then simply disappear. 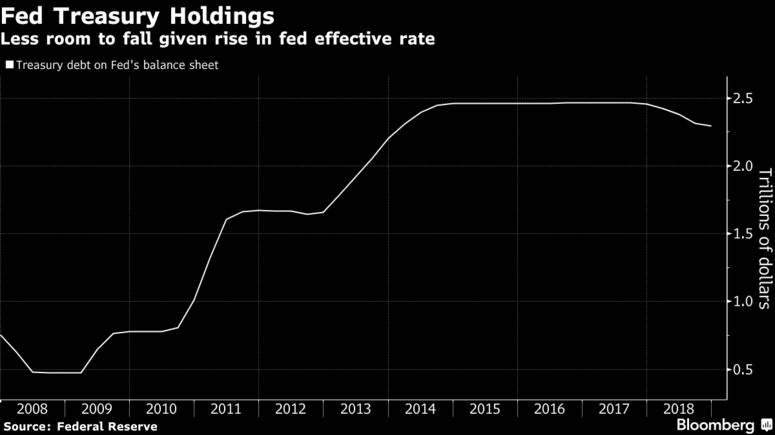 The Fed has given absolutely no indication as to when it may be planning to cease shrinking the United States’ balance sheet.  This leads to speculation on the part of analysts who have some estimates pointing to as far out as December 2019. What is certain is that, should the Fed maintain its current pace until the end of 2018, assets will have shrunk to roughly $3.7 trillion; as of early November 2018 assets were $4.1 trillion and, at one point in 2018, $4.5 trillion.  Basically, that figure would still be far more than the pre-crisis figure of $900 billion.

It’s practically scary to think that, at current balance-sheet levels, the U.S. banking system more than likely will not have enough cash…very soon.

Not to oversimplify the process and route that the Fed is taking, it is helpful to look at the whole process in chronological steps:

Why is this Happening?

On the slightly bright side, we can at least identify a few reasons why all of this is happening.  A good portion of post-crisis legislation was designed to reduce risky behavior. Some good examples of such legislation are Dodd-Frank and Basel III.  Both pieces of law have played a large role in pushing banks to utilize those identical reserves, totaling somewhere in the $2 trillion area, to be in compliance with the aforementioned legislation.  All of these factors combined are contributing to the noticeable scarcity of bank reserves and dangerously low short-term cash amounts that are available. Currently, medium- and small-sized banks are the victims but it is only a matter of time until larger banks and Wall Street feel the effects.

Fed Funds Rate as an Indicator

What’s very important to realize here is that the effective rate for such inter-bank loans that the Fed is “targeting” are used as it sets the nation’s interest rates.  It goes like this: the central bank determines a target range. Usually, this range is between 2 percent and 2.25 percent. Two main policy tools are used in this process so to keep the target within these parameters:

Earlier this year, in June 2018, the Fed adjusted IOER so that it became only slightly lower than the upper target. Prior to this change, IOER and the upper band were interchangeable.  The June adjustment arose as domestic banks doubled their respective shares of daily demand for fed funds in the second quarter of 2018. 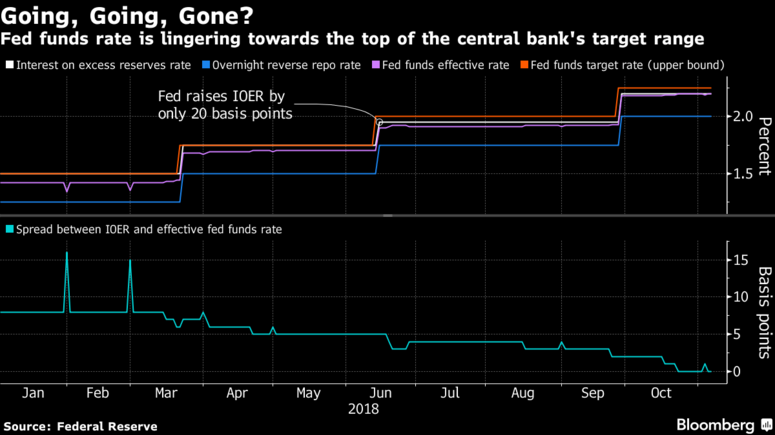 The effective target rate has been increasing since the Federal Reserve decided to par its bond holdings. October 2018 witnessed a shocker as the effective rate settled in at IOER- something that has not happened since 2009. And, since that day in June, both rates have been in sync practically every day for the past couple of weeks.

Is the Fed in Denial?

The Fed vehemently disputes any negative characterization of its office.  Immediately after the Fed’s last meeting in September 2018, minutes from the gathering were released in which it appeared that Fed officials attributed new Treasury bill sales, rising yields and a rise in repo rates as the reason for the most recent upswing. Nonetheless, analysts suspect that an additional alteration to IOER is likely in December.  At the Fed’s December 2018 gathering, traders project the Fed will raise the target rate.

How Bad Can it Get?

Leading industry analysts and experts are very concerned.  Among their concerns, the loudest is that the Federal Reserve is simply ignoring the monumental risk that it is taking, as it puts immense pressure on limited and suffering bank reserves and incites unpredictable and enormous swings in the short-term rate market.  All this is amounting to a balance-sheet runoff.

Indeed, there will come a time, and that time could be just around the corner when all of the country’s reserves will be tied to those who need the funds.  This would be so that these fund recipients can keep up with the regulatory environment- this means there will be a wild goose hunt for short-term cash, basically.  A shrinking balance sheet is not a good attribute, and that is precisely what the United States currently has; the stress of markets is only going to make this dilemma worse.

Thomas Huckabee, CPA of San Diego, California recognizes that the current economy and interest rates are volatile and very confusing to comprehend  Operating a full-service accounting firm, Tom guides clients through the complicated process of knowing which path to take so your company decisions are educated and the best creative planning moves are made for your business