Federal Cost-Sharing Subsidies To Insurers Are Reduced- What Are The Real Impacts?

By Thomas Huckabee
Posted November 2, 2017
In Obamacare Repeal
Federal Cost-Sharing Subsidies To Insurers Are Reduced- What Are The Real Impacts?2017-11-022017-11-29https://tehcpa.net/wp-content/uploads/2015/12/THinc_LogoV8.pngTHInchttps://tehcpa.net/wp-content/uploads/2017/11/Federal-Cost-Sharing-Subsidies-To-Insurers-Are-Reduced-What-Are-The-Real-Impacts.png200px200px 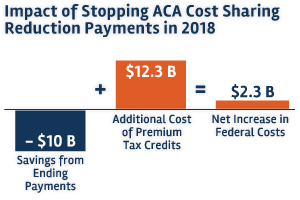 During Donald Trump’s presidential election campaign, he ran on a platform that would repeal and replace President Barack Obama’s signature achievement, the Affordable Care Act (ACA), also widely known as Obamacare.  After failure, on the part of a Republican United States Congress to repeal Obamacare and put a concrete replacement plan on his desk thus far, President Trump has been somewhat forced to search out other ways to dismantle the ACA.  Apparently determined to resolve health care issues on his own, in October 2017, President Trump made an unprecedented move that could unravel Obamacare.  Trump has decided to eliminate cost-sharing reduction subsidies given to insurers that offer health care plans to low-income individuals and families.

Trump’s executive order is widely thought to be a catalyst to force insurance companies out of the ACA’s online health-care marketplace, while also forcing insurers to raise premiums to cover the loss of government subsidies.  A majority of the changes that will result from Trump’s declaration cannot be put into place until most federal agencies create, write and adopt them.  In addition, there is a period for public comments that could take a considerable amount of time.  All this means is that more likely than not, implementation will take months to go into effect.  Major changes, as a result of Trump’s decision, will probably not impact the 2018 health care climate.  In 2019, however, substantial, major and obvious changes concerning insurance coverage should be expected.

At the time of Trump’s decision, insurance cost-sharing subsidies were anticipated to total over $9 billion in 2018, and almost $100 billion in the next decade.  Also, questions revolving around whether the executive branch of the United States government had the actual authority to make such subsidy payments to insurance companies.  A statement from the White House noted that “The government cannot lawfully make cost-sharing reduction payments.”  President Trump’s decision was also supported by Speaker of the House, Paul D. Ryan, Republican of Wisconsin, as Ryan alluded to the Obama administration’s usurping of congressional authority by making and paying cost-sharing subsidies.  “Under our Constitution,” Speaker Ryan commented, “the power of the purse belongs to Congress, not the executive branch.”  It remains to be seen if President Trump’s cost-sharing subsidy elimination will place a lot of pressure on Congress to somehow come up with the funds to make the subsidy payments. 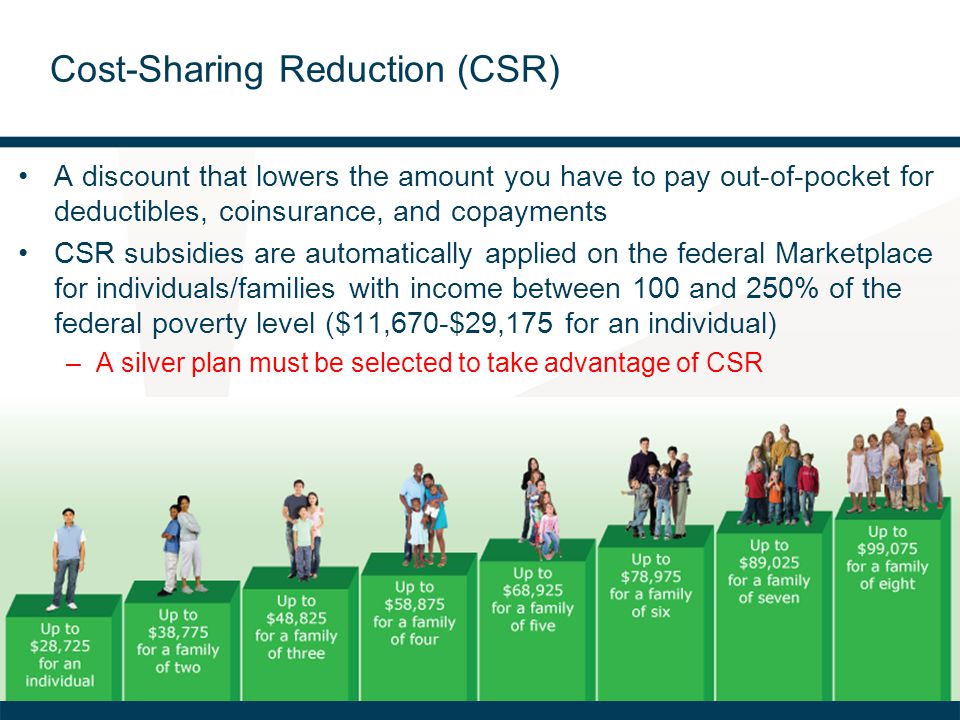 Perhaps the largest effect of the ACA is that it expanded otherwise privatized insurance to millions of Americans who couldn’t otherwise afford it.  This was done via the development and creation of marketplaces, also known as exchanges, that allowed for purchase plans for health insurance.  Online marketplaces and the plans they offered were largely in existence because government subsidies for insurance companies were created to offset costs.  Obamacare also mandated that all plans offered in these marketplaces covered certain additional benefits that would have ordinarily been excluded.  Examples of such benefits are the prohibition of coverage denial due to pre-existing medical conditions, maternity care, hospital care and mental health services.

In 2014, a lawsuit was filed in Washington, D.C. by House of Representatives Republicans, which contested the legality of insurance cost-sharing subsidies being paid by then President Barack Obama administration. United States District Court Judge Rosemary M. Collyer, agreed that funds for cost-sharing insurance subsidies were never approved and appropriated by Congress.

Subsequently, an appeal of this ruling was filed by the Obama administration.  Despite President Trump’s intense dislike and opinion that the subsidy existence really just provides bailout funds for insurance companies, his administration continued the payments.  Immediately after Trump’s inauguration, a debate ensued over whether or not the slashing or complete reduction of subsidies would be a fatal blow to the ACA because insurers would undoubtedly exit marketplaces and premiums would rise for those insurers that chose to remain in marketplaces.

Ceasing the payment of these cost-sharing reduction was, in theory, supposed to squeeze insurance company margins.  In practice, however, we are starting to see that President Trump’s decision to slash subsidies really won’t have the impact on insurer profits that it was supposed to…and the entire insurance market will not completely unravel.  This is because insurers basically anticipated that Trump would cease paying insurance subsidies.  So, they went ahead and increased their 2018 monthly premiums on plans offered in ACA insurance exchanges in anticipation; effectively offsetting a majority of the shortfalls in profit that insurers could experience.  Basically most health insurers have, in fact, have been silent with regards to commenting on the executive order, with the exception of some voicing concern surrounding the stabilization of the insurance market.  According to Ceci Connolly, chief executive of the Alliance of Community Health Plans, Trump’s proposal  “would draw younger and healthier people away from the exchanges and drive additional plans out of the market.”

The top Democrats in Congress, Senator Chuck Schumer of New York and Representative Nancy Pelosi of California, issued a joint statement saying that President Trump had “apparently decided to punish the American people for his inability to improve our health care system.” Continuing, they called Trump’s decision “a spiteful act of vast, pointless sabotage leveled at working families and the middle class in every corner of America…Make no mistake about it, Trump will try to blame the Affordable Care Act, but this will fall on his back and he will pay the price for it.”

Policymakers from both sides of the aisle have also been urging President Trump to continue the cost-sharing subsidies for insurance companies.  For the past several months, since President Trump mentioned the possibility of subsidy elimination, Republican senators even warned him that his own party would essentially “own health care” as a political issue if he altered the subsidies.

During Summer 2017, a number of states, California and New York among them, were permitted to intervene in the court case revolving around subsidies. And, in late-October 2017, Eric T. Schneiderman, New York attorney general, stated that a coalition of states “stands ready to sue” if Mr. Trump cuts off the subsidies.

Ironically, the decision to end the $7 billion-a-year cost-sharing payments is likely to cost the federal government more than making them — nearly $194 billion over  9 years, from 2017 through 2026, according to the Congressional Budget Office.

That is because the ACA requires that premiums don’t exceed a set percentage of a person’s income. So as premiums set by insurance companies rise over time, the government has to boost its tax credits so the cost to the consumer remains the same.

Last year, about 85 percent of people who bought Obamacare insurance got a tax credit, according to the Centers for Medicare and Medicaid Services.

A considerable amount of hospital executives, doctors, patients and state insurance regulators are not thrilled. Their position is that envisioned changes by Trump would lead to higher costs for ill patients and a rise in sale of bare-bones insurance.  Also, the medical community is worried about the impact on the already unstable health care market.

Six physician groups, including the American Academy of Family Physicians, also issued a joint statement in which medical professionals predicted that “allowing insurers to sell narrow, low-cost health plans likely will cause significant economic harm to women and older, sicker Americans who stand to face higher-cost and fewer insurance options.”

The quickest effect of cost-sharing subsidy elimination would probably be that it will make short-term plans more popular because these plans are exempt from the ACA.  Health care policy experts are worried about this reaction; this is because premiums for nonshort-term health plans would rise, especially for those who still must use ACA plans.  The thinking behind this worry is that a mass exodus of healthy individuals would abandon the ACA plan.  This would leave the ACA marketplaces with a pool of people with pre-existing conditions and illnesses because short-term plans for sick people are pretty much nonexistent.

“If the short-term plans are able to siphon off the healthiest people, then the more highly regulated marketplaces may not be sustainable,” said Senior Vice President, Larry Levitt, from the Kaiser Family Foundation.  Levitt also criticized these short-term plans saying “these plans follow no rules.”

The implementation of President Trump’s executive order would also make health care easier for small businesses, as they will band together.  If small businesses can band together, they could purchase insurance known as association health plans.  The White House has said that short-term health plans “could potentially allow American employers to form groups across state lines” — a goal whose greatest supporters are Republicans and President Trump.  Availability of association health plans could mean more options and higher participant risk pools.

ACA Silver plans are utilized to determine insurance holders’ advance tax credits that ACA members can use to decrease the dollar amount of their monthly premiums.  Hence, insurers have increased the premiums on their health care plan offerings because higher premiums would offset any funds they would lose if cost-share subsidies are taken away.  Recent data collected and analyzed by the Kaiser Family Foundation anticipates that the end of cost-sharing payments will lead to increases in ACA Silver plan premiums by anywhere between 7% and 38%. 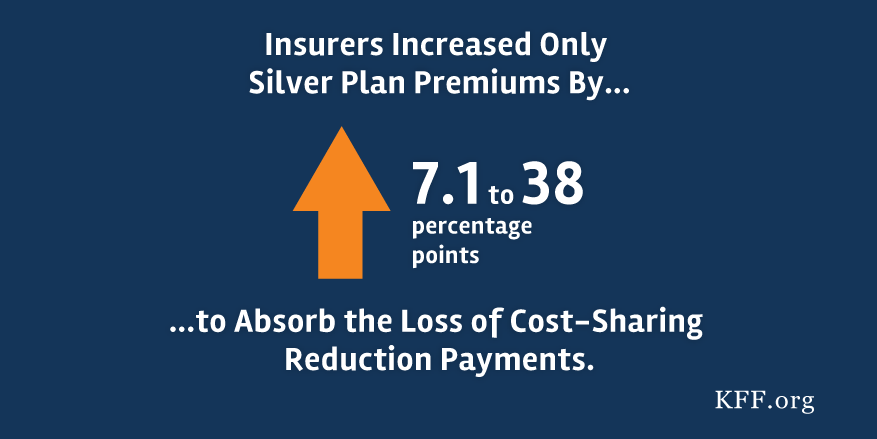 This move, on the part of insurers, allows insurers to basically avoid sidestep revenue headwinds created by the elimination of subsidies. And, as it currently stands, consumers will not be directly affected by premium hikes.  In fact, the biggest victim would probably be the federal government, which would be on the hook for additional costs resulting from subsidy removal.

In the early part of 2017, a nonprofit entity with a focus on health care, the Kaiser Family Foundation, estimated that premiums for Silver plans would need to rise by 19% in order to compensate for the subsidy that insurers needed.  In California, a practically identical conclusion was made, in which it was estimated that Silver plan premiums would have to rise by 16% to not be affected by the loss of subsidies.

Will Insurers Actually Come Out Ahead?

Insurance company revenue and profit will tumble, as investors decide to hold onto their shares in insurance companies.  This act could potentially result in a full offset of losses from subsidy absence for insurance health organizations.  Additionally, padded premiums may mean that insurance companies collect even more money from the federal government- according to several models.  And, if President Trump reverses his decision to cease the payment of subsidies, health companies will still have hiked premiums.  This leaves open the possibility of seeing even higher insurance company profits because insurers would be getting their subsidies and also reaping profits from their increased premiums.

Despite insurance health care modeling efforts, it is not a definite that these models are correctly predicting the future of health care, especially how much premiums need to increase.  Insurer revenue could suffer if higher premium subsidies cause people to enroll in Gold or Bronze plans in lieu of Silver plans. Silver plans have been growing much quicker than Gold and Bronze plans, although Gold plans are becoming very competitively priced to Silver plans, and Bronze plans are almost practically free.

Thomas Huckabee, CPA operates a full-service accounting firm in the San Diego, California area. Our accountants and CPAs offer professional help and guidance while making sure your business is making accurate, appropriate and efficient decisions.  Contact us and learn more about our services. 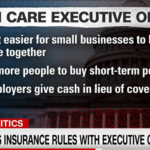