Despite doubts, the Trump Administration’s tax cuts for corporations are having a noticeable impact.

The most important takeaway at the mid-point of the current earnings season is that businesses are predicted to earn a substantially higher amount money.  Why the change?  Well, the now implemented Tax Cuts and Jobs Act’s (TCJA) legislation substantially reduces the corporate tax rate to 21 percent from 35 percent.  Business leaders are actively preparing and planning for the TCJA’s imminent windfall, with some companies intricately detailing specific investments in technology or infrastructure at the same time they are accounting for their one-time charges and benefits.

Strategists and analysts at JPMorgan Chase & Co. have publically released studies which reveal that a sweeping record 75 percent of businesses have increased their profit guidance, As these findings are reviewed, and taken into account alongside the perks of lower corporate taxes, Wall Street anticipates that domestic entities will increase capital expenditures by up to 6.8 percent this year .  Incidentally, these figures are greater than five times the expected growth in 2017. 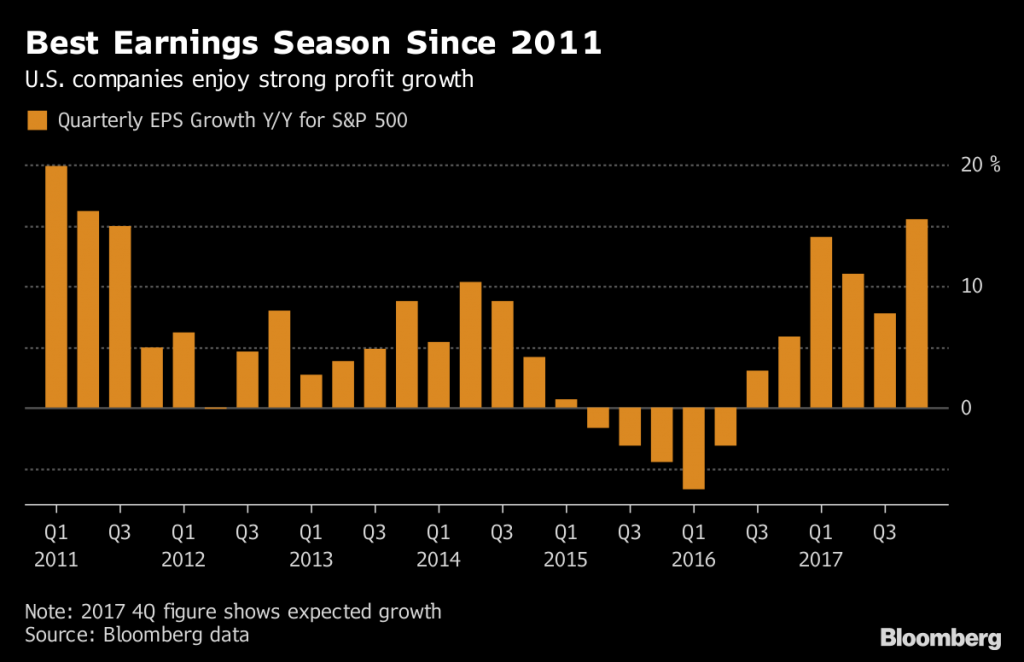 There are, beyond capital spending, additional needs and resources also needed.  Examples of where this concept may be applicable include the arena of  higher pay for employees in an existing tight labor market, balance sheet maintenance and investor returns in the form of dividends and buybacks returns to investors.  From an overall standpoint, important business announcements encompass many years but little detail of what will occur in these years, outside of quite vague headlines.

In response to the reduced corporate tax rate, AT&T Inc. said free cash flow this year will surge almost 20 percent to over $20 billion, providing the phone carrier more financial flexibility.  The telecom mega-corporation had already announced it would invest an additional $1 billion in the U.S., assisting the corporation ready itself for the move to a new fifth-generation mobile network, and give $1,000 bonuses to employees, thanks to reforms that Chief Executive Officer Randall Stephenson named “capital freeing.”

Chief Financial Officer John Stephens made it down the business sees tax reform strengthening AT&T’s market position. “We see a significant boost to our balance sheet, reducing $20 billion of liabilities and increasing shareholder equity by a like amount,” he said last week on a call.

Lockheed Martin Corp., the world’s largest defense contractor, is earmarking some of its expected windfall for pensioners. The company plans to contribute cash in the amount of roughly $5 billion, meeting its required obligations until 2021.

The organization is also increasing its dedication to initiatives and priorities like worker training, contributions of the charitable sort for education in math and science and adding $200 million to Lockheed Martin Ventures fund, CEO Marillyn Hewson noted on a call.

Lockheed anticipates earnings will at least double this year to $15.50 a share, boosted by the U.S. tax cuts and increased deliveries of its F-35 Lightning II fighter jet.

Reduced corporate tax rates will perhaps give a boost to the yearly net incomes at the five largest U.S. banks by more than $10 billion, especially when one takes into account what these banks paid over the last three calendar years. JPMorgan, the largest corporate taxpayer besides Apple Inc., has mentioned that it is transitioning to a plan which will benefit employees and clients, including subsidies for those in lower-income tax brackets and assistance for small businesses.

Chief Executive Officer, Brian Moynihan, of Bank of America Corp. has said the “vast majority” of the tax benefits will be used to return capital to shareholders, while Citigroup Inc.’s Michael Corbat noted the reduced corporate tax rate would help the bank make good on a promise to pay out $60 billion over several years. Wells Fargo & Co. has said that the new tax rate raised its minimum wage and fostered more charitable giving.

However, there are some hiccups to be addressed in order for the benefits of the reduced corporate tax rate accrue. Morgan Stanley absorbed a $990 million charge during the quarter in which the U.S. tax overhaul was being debated.  Goldman Sachs Group Inc. said the short-term negative impact to its capital resulting from taxation of retained foreign earnings would result in slow buybacks in the first half of 2018.

Merck & Co.’s corporate tax rate will be reduced to roughly 20 percent from 35 percent, while providing additional movement opportunities for larger capital expenditures, in addition to research and development costs.

The drugmaker anticipates spending $12 billion over a period of five years, including $8 billion in the U.S., with vaccines, oncology and animal health focused on for investment, according to CFO Rob Davis. Merck has also announced that it will fund one-time bonuses to a portion of its 69,000 employees.  Merck & Co.’s top priorities also include the dividend, business development deals and repurchases, when possible.

Merck closed out the year with over $20 billion in cash and intends to repatriate about $17 billion over a period of time. The proceeds will be invested in the company, its dividends- any remaining money will go toward deals and share repurchases.

AbbVie Inc., manufacturer of the top-selling drug Humira, plans to spend $2.5 billion on capital projects in the U.S. as a result of tax reform and is investigating the possibility of the expansion of some or most of its U.S. operating facilities, according to CEO Richard Gonzalez. The pharmaceutical company will spend $750 million to accelerate pension funding and raise the paychecks of non-executive employees,

AbbVie has announced that its tax rate will plummet to 9 percent by the end of the year. It was 19 percent last year. As a result the business hiked up its yearly profit guidance by as much as $7.43 a share, rendering a 13 percent jump.  “U.S. tax reform enables more efficient access to our foreign cash, and the ability to deploy it in the United States,” Gonzalez said on the call.

Roche Holding AG’s corporate tax rate will lower its tax obligations from 26.6 percent in 2017 to the low 20 percent range. This will translate into core earnings per share’s rise by a high single-digit rate tin 2018; without the tax deduction, earnings might have been little changed.

“We do benefit from the U.S. tax reform,” Severin Schwan, CEO of Roche, said in a conference call. “We have been one of the biggest taxpayers in the United States.”

The business with the largest decision to make is Apple because the company has a net cash position of $163 billion — effectively the sum of its $285 billion cash hoard and debt obligations of $122 billion. Apple’s goal is to lower that figure to zero and will announce more detailed plans after it reviews results for the current quarter ending in March 2018, Chief Financial Officer Luca Maestri said on a call.

“When you look at our track record of what we’ve done over the last several years, you’ve seen that effectively we were returning to our investors essentially about 100 percent of our free cash flow,” Maestri said. “And so that is the approach that we’re going to be taking.”

In the last quarter of 2017, Apple paid out $3.34 billion in dividends and repurchases over more than than $10 billion of its own stock.

Apple had no difficulty financially supporting acquisitions prior to tax reform, Maestri said, and doesn’t foresee any now, either. In 2017, Apple made 19 acquisitions. “It’s always the customer experience in mind, right, that we make acquisitions,” Maestri said. “We look at all sizes and we will continue to do so.

As organizations have begun to start implementing these updated standards, they are noticing that they must employ far more resources than management teams anticipated.  Going back in time and modifying the ways a company collects data and modifies it for reporting can be very cumbersome.  Begin the standards’ implementation processes and avoid headaches by contacting Thomas Huckabee, CPA in San Diego, California.  Our office will help your business understand and assist your business putting the new standards in place. Please contact us for further information.